Hello everyone. We will talk about urban regeneration today. Throughout this course, we reviewed the basics of urban planning but today we will focus on Cheonggyecheon restoration. So today's topic is Cheonggyecheon restoration and urban regeneration. We will go over the background, overview and motivation for regeneration, and how to plan, how to make it happen in terms of the technological perspective. And finally, we will look at the achievements. Firstly, we need to explain the backgrounds like where Cheonggyecheon is located and its geographical characteristics. The area in the black box is the downtown area, which is also known as old town, above the Han river.

This the iconic picture depicting the life around Cheonggyecheon in the 1960's. In the middle you can see a shared toilet because there was no infrastructure including drinking water, toilet, sewer system or electricity. They used a public toilet without any treatment system so Cheonggyecheon suffered from heavy pollution. In this picture, you can see the water for cleaning and bathing, which caused even more pollution due to waste water flowing through Cheonggyecheon. As a counter-measure to the problem of waste water, pollution and sanitation, the government decided to cover the area and turn Cheonggyecheon into a major sewer trunk system.

And also there was another need for a road. In this case, we built a road on top of Cheonggyecheon while the area underneath was used as a major sewer pipeline. Even further, the government built an elevated highway over Cheonggyecheon due to a high demand for transportation caused by traffic congestion. Elevated highway was built over the top of Cheonggyecheon, which became a major artery to and from the downtown area. In this picture, you cannot see the sewer system, but it is running under the road system, while above there are roads with more than twenty lanes of cars.

In the year 2000's there is a big paradigm shift from an efficient city to a more ecological city. So the Seoul government wanted to make its environment more ecological and human-oriented, And a big decision was made to restore Cheonggyecheon in the downtown area. This process is called a creative destruction, or a creative recreation, of public space. Cheonggyecheon has changed over time from a natural stream, drainage for flood prevention, sewer and roads, to a green pedestrian path across the city. Today we will specifically talk about the restoration process and the plan and technologies that were used. 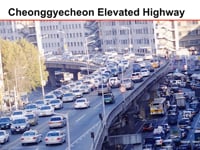 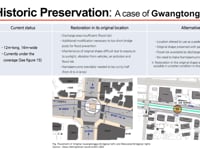 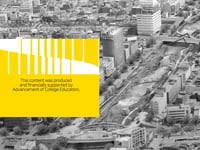 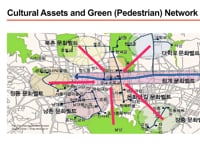 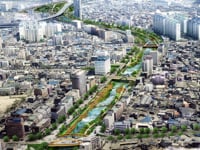